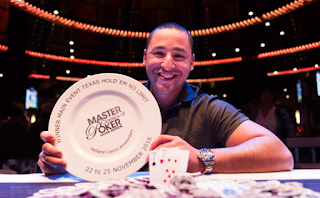 A classic flip ended it all and Zoufri was soon lifting the trophy and posing with the check worth €275,608 after beating a field of 356 entries.

As the casino closed at 3 a.m. on Friday night, the Main Event of the 25th anniversary of the MCOP needed an additional day of play. The two remaining players returned to the felt to battle it out for €275,608 while already guaranteed a payday of €184,820.

While Fabio Sperling had dominated most of the final table on the penultimate day and had held the chiplead for most of it as well, the final day saw a different picture drawn. It was Hakim Zoufri who dictated the action and it was just about a one-way street the way the chips were going. Zoufri made big hands and found value. He won the smaller ones as well.


It didn't take long before Sperling was down to 30 big blinds. Sperling opened with ace-queen suited and saw Zoufri three-bet. Sperling, a German living in the United Kingdom, moved all in and Zoufri called with pocket sevens.

The most important hand of the tournament for both was underway; there were no more decisions to be made and their faith in the dealer's hands.

The flop brought no cards of any influence really, but a spade on the turn brought fear to Zoufri as Sperling picked up a flush draw on top of his aces and queens which were still live. A complete blank on the river, however, ended it all.

With that, Hakim Zoufri was soon getting handed flowers, a giant Heineken mug, a unique MCOP plate and, of course, the check worth €275,608. Zoufri is the latest addition to an impressive list of Master Classic of Poker winners that include Ole Schemion, Noah Boeken, David Boyaciyan, Ruben Visser, Ram Vaswani, Robert Mizrachi and Jussi Nevanlinna.

he Main Event of 2016 the Master Classics of Poker is on the books. The next big event coming up in the Netherlands is the Dom Classics in Utrecht in January. Besides a World Poker Tour and WPT National Event that has been featured on the Dutch poker calendar, the state-owned casino also announced last week that a World Series of Poker International Circuit will be held in Rotterdam in the fall of 2017.

That's it for PokerNews' coverage of the 2016 Master Classics of Poker. Next up for the Live Reporting team is the Unibet Open in Bucharest next week, followed by a trip to Prague for coverage of the last European Poker Tour event ever.