BUY CHEAP VTU SERVICE
NEWTOBETTING.COM
DraftKings Launches Daily Fantasy Sports in United Kingdom. lots of exciting betting games is being launched by top betting company. i guess most of you may have heard about fantasy sports and some may be hearing about it for the first time. well, According to wikipedia, A fantasy sport (also known less commonly as rotisserie or roto) is a type of online game where participants assemble imaginary or virtual teams of real players of a professional sport. These teams compete based on the statistical performance of those players' players in actual games. 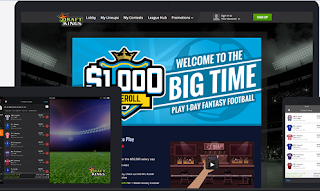 This performance is converted into points that are compiled and totaled according to a roster selected by each fantasy team's manager. These point systems can be simple enough to be manually calculated by a "league commissioner" who coordinates and manages the overall league, or points can be compiled and calculated using computers tracking actual results of the professional sport. In fantasy sports, team owners draft, trade and cut (drop) players, analogously to real sports.

fantasy sports or football is a kind of virtual league games where punters will be the one to pick and form their own team to play against any one in a competition made on the betting website. this simply means that you will be a manager of a team, controlling the team and their formation to play against other fantasy sports manager's team in a pre-made virtual leagues or you can decide to play against your friend's team if they also have a fantasy sports team on the website. you can just call your friend and stake a bet that your team would win his or her team in an head to head match. this of course will have a stake from both teams or the leagues you wish to add your team for that season.

still don't understand right, well, fantasy sports is like normal leagues, e.g champions league, premier league etc but this time around, its a virtual league and team selected by punters themselves to play against each other in a league season or head to head matches. you have a chance to put your team in a league games made to be coming up in the next season of the league. for example, if there is a league that has been set aside in fantasy sports, you as the manager and owner of a team can decide to add your team in the league provided you have the required cash to stake on that league and you qualified for it. during the league, just like normal league, the winner at the end of the league season goes home with the ultimate price( Cup, in the case of normal real sports league ).guess you now have a little understanding on what is fantasy football.

since you now have little understanding, lets proceed to Draftkings which is one of the top betting site that is focused on fantasy sports betting. DraftKings recently Launches Daily Fantasy Sports in United Kingdom.The Daily Fantasy Sports (DFS) phenomenon has swept through America like a tidal wave, and now that wave is crossing the pond and hitting the United Kingdom.

DraftKings, one of the premier DFS providers in the United States, fired off its long-awaited UK launch today. Users in the UK will be able to enter into contests right along with their American counterparts, giving everyone the chance to play DFS for even bigger prizes.

If you haven't played DFS yet, here's the rundown. Fantasy sports, in which competitors select real athletes who accrue points for their fantasy teams, has long been part of the fabric of sports fandom in the United States, going all the way back to the 1970s, when the first rotisserie baseball league was formed. A few years back, some enterprising individuals had the ingenious idea of condensing the season-long aspect of fantasy sports into a one-day or one-week contest, and DFS was born.

Whereas in season-long leagues a poor selection or a devastating injury can have ruinous effects, in DFS those problems are washed away the next day as the slate is wiped clean and you can pick a brand new team. It's easier, faster, more exciting, more fun, and less hassle.

The concept has proved wildly popular, and DFS exploded in popularity stateside in the past couple of years. DraftKings emerged as one of the leaders of the industry, a position that will only strengthen with the unprecedented European product launch.

If you want to get in on the action, head over to DraftKings and get started picking your teams to grab your share of thousands of dollars awarded every day.