» BETTING TYPES » Corner Handicap : What Does It Mean

Corner Handicap : What Does It Mean

BUY CHEAP VTU SERVICE
NEWTOBETTING.COM
Guess you have seen a betting type called corner handicap -2.5/+2.5, -3.5/+3.5 , -4.5/+4.5 etc on nairabet, merrybet, bet3365, 1960bet, bet9ja and other foreign sport betting bookies but don't know what it means.well, today i am going to explain what corner handicap means.corner handicap is simply a bet type that enables the punter to give a team extra corner or lower before the game starts and at the end of the game, the corner handicap will be added or subtracted from the team you choose.getting confused already,then let me explain more on What Corner  Handicap Means. 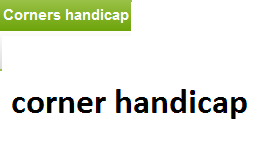 on the other hand, if you choose west albion as your team with +4.5 corner handicap, it means that they will add 4.5 ( also seen as 5) corners to their total corner kicks at the end of the game and if after adding it, their corner is more than manchester, then they won the game even if their normal total corner was lower than manchester at the end of the game before adding their corner handicap.guess you now understand. I had to break this down so every one can understand it because at first it may seems confusing.with the break down, you will understand it.cheers.
if you have not created NAIRABET ACCOUNT, CLICK HERE TO REGISTER FOR FREE

No Responses to "Corner Handicap : What Does It Mean"